The observation of lasing in the forward direction in air upon focusing intense femtosecond light pulses has been a puzzling phenomenon since first observations were reported about two decades ago. Current understanding is that single ionised nitrogen molecules N2+, that are generated by the intense 800 nm laser pulses, are responsible for the lasing at 391 nm or 428 nm. An intense scientific debate has resulted in several models being proposed that all involve three electronic states of N2+, the X, A and B states (see image), with additional roles of vibrational and/or rotational degrees of freedom. Scientists at the Max Born Institute of Nonlinear Optics and Short Pulse Spectroscopy have shed new insight on this using novel ultrashort soft X-ray spectroscopy. Standard models for ionisation, population dynamics and lasing do not comply with the obtained results. Instead, the experimental measurements strongly point to a coherent polarisation interplay between the B, X and A states.

The use of ultrashort laser pulses to induce and study ionisation phenomena of small molecules is well established. Typically, the large electric field of a short intense pump pulse causes the ejection of an electron out of a molecule. Often several electronic excited states of the molecular ion may result, where the standard tunnel ionisation mechanism predicts that the degree of excitation will be inversely proportional to the excitation energy (see Figure). For molecular nitrogen this would mean the X ground state will have a higher population than the A and B states. The basic rule for the lasing phenomenon, utilised in lasers (light amplification of stimulated emission of radiation), however, is that the population of the excited state should be higher than that of the ground state. For the N2+ molecules, this means a higher population in the B state than in the X state would be a necessary condition, contradicting the standard tunnel ionisation model. An experimental verification of the time-dependent population of all three electronic states, that are understood to play a key role in lasing in ionised molecular nitrogen, has until now been lacking. One reason for that is that population changes of the X, A and B states could only be deduced from indirect probing at particular transitions between individual electronic states.

A state-of-the-art table-top laser-based system generating ultrashort soft X-ray pulses tuned at the nitrogen K-edge has now been used at the Max Born Institute to simultaneously probe the time-dependent population of the X, A and B states (see Figure). Here the transitions of the 1s core to the valence molecular orbitals of N2+ are monitored in real-time. It turns out that directly after the ionisation event the B state has a similar degree of excitation as the X state, while the population of the A state remains remarkably low. With these results the role of the A state as a possible reservoir for a depletion of the X ground state can be excluded. Instead, a coherent interplay of the light fields of the ionising pump pulse at 800 nm and the lasing light field at 391 nm wavelengths, coupling the B, X and A states in a so-called V-scheme (see image), is the most plausible underlying mechanism for the observation of lasing in air upon interaction with intense femtosecond laser pulses. Such a interaction scheme enables the so-called lasing without population inversion mechanism.

The potential of the table-top laser-based experimental femtosecond soft X-ray spectroscopic method demonstrated by the team at the Max Born Institute will be further capitalised on by exploration of light induced molecular phenomena on time scales of the elementary steps in molecular rearrangements, in the gas phase and in solution phase. 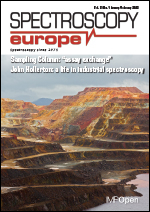 Change of management at SPECTRO
10 January 2022